“Bohemian Rhapsody”: the birth and fall of a legend 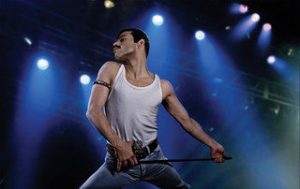 I can’t assess the impact of Queen on the world — I was born after Freddie mercury died, and I didn’t see Live Aid or the Barcelona Olympics or anything else. But at the same time their songs have been with me since childhood, imperceptibly filled the information space, and the existence of extraordinary Britons who recorded “Bohemian Rhapsody” (Bohemian Rhapsody), as if everyone knew.

The cult of the group, as I think, just lies not in the number of fans, but in its fame. You can not know the facts of the biography of musicians, their favorite colors and the number of spouses, not to have in the brain the entire discography by release date, but to know that these people came together and made such and such a track — and this is in my understanding of fame.The fact that” Bohemian Rhapsody ” could start singing along to any student at my Alma mater, if it suddenly someone will play. What most remembered “Highlander” as “the movie that played “Who Wants to Live Forever” and “Princes of the Universe”.” The fact that the word “Barcelona” was often uttered in a singsong voice.Well, the show, as they say, must go on.
The biopic “Bohemian Rhapsody”, contrary to the stories of producers, actors and other involved, was still not a film about the group Queen, but the story of Freddie mercury. History, and, quite simple.The film was created with great difficulty: for the first time it was talked about in 2010, planned to work with Sasha Baron Cohen, postponed production, went through several Directors and writers… In the end, settled on Bryan Singer, who is responsible for the current generation Of “x-Men”, but he was not able to bring the picture to its logical conclusion, and a few weeks before the end of filming, he was replaced by Newton Thomas Siegel and Dexter Fletcher. Sacha Baron Cohen in the role of Freddie mercury did not stay-he wanted a more adult film than the PG-13 rating allowed and than the band members Brian may and Roger Taylor, who became producers of the film, and Manager Jim “Miami” beach, wanted. As a result, the role of the vocalist was taken by Rami Malek — an American of Egyptian origin, most remembered for the recent “Moth” and the series “Mr. Robot”.And he did it wonderfully.

Freddie performed by Malek is absolutely alive. It feels at the same time and piercing the ceiling and the sky aplomb, and sitting in the depths of uncertainty and anguish, and an inexhaustible desire to create. He perfectly showed a versatile, confused, oversaturated personality, at some point lost himself. Habits, antics, looks, movements, the smallest gestures-Malek very well was able to embody all that visual artistry for which mercury was famous. As Malek said in an interview, during the filming, he and Brian may went to visit Freddie’s sister, kashmira, while in character, which caused her to cry, accompanied by the words: “This is my Freddie.” Maybe it’s just a bright story for the press, but the image Malek created if not falling 100% in the really existing Freddie, then perfectly conveying his bright features.

The rest of the cast are extras for Malek’s glow. The three other Queen members are never shown separately, always go in sets, and their lives just don’t seem to matter as much. But visually, the resemblance is simply stunning. Brian may said, that indeed saw themselves in execution Gwilym Lee, and noted, that relationship participants groups shown credibly: he-Gwilym seeks achieve compromise, Roger Taylor, played Ben hardy, climbs on trouble, and John deacon from Joseph Mazzello khmyknaet somewhere on the periphery. But some facts, for example, the process of creating the same “We Will Rock You”, changed in favor of entertainment.

The story of Mary Austen, Freddie’s girlfriend and even fiancee, played by Lucy Boynton, begins with a smooth, unhurried romance slowly escalating into conflict. Style life rock stars not close Mary, Yes and himself mercury in the process Affairs finds out, that men his all -??? attract stronger, but under this dedicates Mary lyrical “Love of my Life” and shows it concert record.And everything goes downhill. From the history of the development of a promising rock band, striving for experiments, the film turns into a personal story of a broken, lost all his essence of a person, mutates from a rocker biopic into a personal biopic. The PG-13 rating simply does not allow us to show the parties accompanying the fall, full of alcohol, sex and drugs, leaving us only traces of the festivities, in a neat, carefully calibrated mess scattered on all horizontal surfaces, and a red-eyed, haggard, coughing blood Malek with bags under his eyes, accommodating the us national debt.

It’s boring to watch. Not that I demanded from the film about the life of one of the most depraved rock vocalists of the last century an adequate image of all the things that were happening in his life, but to be honest – such parties that are shown in the film are now arranged by schoolchildren, and not by rock stars. Boredom was being followed before, during descriptions of the tour group in USA. Yes, there are bright performances, but you do not feel their scale, their grandiosity. Not in sight, that group played in student bars, and then recorded “Rhapsody” and went smash charts and row money shovel. The feeling of superstardom and rapid rise of the film could not convey an iota.

The second half of the film is as tearful as possible: Malek with huge eyes in the image of Freddie suffers, continues to spoil his life and bury himself deeper, learns that he does not have long to live and decides in the end, without finishing the second solo album, to return to “his family” – the group Queen and Mary Austin. And the culmination of this return was a performance on Live Aid.For the film completely recreated the scene at Wembley, drove a few thousand people extras and almost completely (under plywood, of course) replayed the performance of Queen, cutting one song and cutting the rest. And at this point, the drama turns into a triumphant concert video, which ends. The re-recorded performance is as energetic, vivid, lively as possible — you could even call it an upscale of the original, I think.

Except we all saw it. The film goes on the beaten track if not all, then many biographical pictures. The group met, the brightest member of it began to experience problems, conflicts went, disintegration, then a triumphant reunion and a bright performance, to which this reunion leads. Despite the fact that the history of the existence of each group is still something different, biopics for some reason are always the same, and “Bohemian Rhapsody” this cliche has not passed. The film seems to be trying to tell a story from BT’s colour space.Yes, but served in Sepia. And it looks very strange.Because life have Queen together with Freddie was modicum and not the most long, but surprisingly flamboyant, rapid, diverse. In the film, the history of this group looks the same as the history of some unpretentious indie garage. There is no scale, there is no sparks, storm, madness, there is no stardom and grandiosity, there is no innovation and experimentation, there is nothing that would distinguish Queen from others. And they have, incidentally, even the guitar in a homemade guitar played and not a single word about it.

But the fans will love it, of course. Fans will even have something to cry over, because singer uses tearful dramatic moments skillfully. The episode with a trip to the clinic under “Who Wants to Live Forever”, however, is too banal, but it works.The picture is pretty. The narrative is unhurried, but episodic, the action lasts like condensed milk, and then abruptly breaks off and changes to another condensed milk. At the very beginning, what is called gear porn is shown — the musical equipment is shot from the most seductive angles, close-up, in detail and clearly, with beautiful shadows and highlights. Then they forget about it, concentrating on Malek’s baggy eyes and, later, on his artificial mustache.

The seals that showed, Yes, thank you for the seals, the seals were cute, though, and rumbled out of place.And Yes, the very “Bohemian Rhapsody” in the film never sounded entirely. So in order to listen to the songs of Queen, go to the movies is not worth it. It is better to include them on disks or even on streaming.