“Mandy”: and one in the field warrior 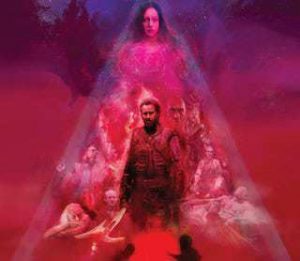 It is not necessary to Wake a sleeping bear, know all the inhabitants of the forest and hunters. And that not to Wake Nicolas cage should have been learned by all the movie thugs and murderers, and infernal creatures, too. Let him sleep with his teeth against the wall! But there is no after all, with enviable constancy are Goonies, which this rule try to violate…

This time Nicholas was to be a professional lumberjack named red.

Worked red ledorubom whole turned out at it not bad, although it must be noted that prevents this last image of the cage, become familiar in action movies and family movies. It is not easy enough to get used to the fact that now it is a slow and laconic big man, and not a thin man who likes to chat from the militants or a family man, again without stopping talking something. Emerges on the face, as manifested in photography, familiar roles. But there is no, here hero Nicholas destined to different.Director Panos Kosmatos decided to show us an action movie with elements of horror, shot in the scenery of tabloid fantasy. By the way, Panos is the son of Director George pan Kosmatos, familiar to many from the pictures “Cobra”, “Rambo: First blood 2”, “Leviathan”, “Tombstone: Legends of the wild West”. So I decided, as they say, to continue my father’s tradition. All the fuss in the film erupts because of red’s wife Mandy (Andrea Risborough).

Mandy is a woman of unusual eccentric lady still can not move away from the image of a teenager and loves to read books of the fantasy genre.

For reading beloved fantasy
In addition, she herself draws well in the same genre.

According to the canons of the fantasy genre
But Mandy behaves a little unusual and tells strange things. In short, unconventional around the. With this role, Andrea copes well, but, unfortunately, her opportunities to show her acting talent are quite limited. In the film, red is very attached to his wife, because behind the rough-looking nature hides a tender and loving heart.

The family in the collection
And Mandy managed to catch the eye of the half-crazy cult leader Jeremiah Sand, played by Lynas roach …

Ominous lights in the gloom
In fact, the plot of the film is very simple, straightforward and, of course, predictable. We’ve seen it all before. In villains in fact, too, nothing particularly mystical there. But Panos decided to present the simple-looking action as an epic battle between the forces of good and evil. Isn’t that what fantasy books are about? Therefore, most of the frames in the film are painted in unusual colors, so that familiar landscapes often turn into pictures from another fantastic world. All the action develops slowly, slowly; from a certain point, even an imaginary feeling is created, as if the viewer himself is under the influence of a drug. This approach personally me “Mandy” remotely reminded famous the film ” dead man.” But behind the slowness lies a growing power, and closer to the denouement, the spectacle already resembles the battle of a fantastic hero with a real creature of Hell. As the head of supernatural forces Jeremiah here is given the opportunity to speak on behalf of all the infernal villains.

All the vicegerents of God do with their hands like this
Mandy can not resist alone: the enemy has grabbed her and holds, and so the fight is on a mental level. Jeremiah loses it, which predetermines the course of further events. He takes out on Mandy his anger and bitterness from the psychological defeat, so red has no choice but to fight alone with a rather dangerous opponent. As is customary in the fantasy genre, the main character has his own gunsmith (bill Duke), and along the way there is a magician who points the way, played by Richard Break.

Well, again, they did it!
And if Nicholas barely got used to the image of a desperate lumberjack, the game Linas in the role of a mentally ill new Messiah does not cause questions. However, as his entourage — intoxicated by blind faith, a group of fanatics. For this fat plus.

When God personally authorized everything
And tension in fight of the lonely hero with this embodiment of otherworldly evil suffices with excess. Sometimes it seems that he has almost no chance. That a man, even one as seemingly indestructible as red, was helpless in such a situation.

A hatchet will do!
But he does not know how to lose heart for a long time and will not let the enemy descend. Incidentally, in move routing and the axe, and a chainsaw, and even a crossbow. Ah and hands, the very a, well is obtained, if until this deal comes.

Called?
In the film, you can notice allusions to Tarantino’s “from dusk to dawn” and even to the Oscar-winning “Survivor”, but there are no direct borrowings of other people’s ideas. And, of course, this atmosphere! Her Panos managed to create a hundred.

Hell is just around the bend
It is clear that the castle of the main villain is in a gorge among the rocks, and not everyone can get into it. The hero will have to go through the wastelands and gloomy catacombs, and fight with the villains.

I shouldn’t have woken the bear
At the same time, the most ordinary places and things in the eyes turn into a real arena of fantastic battle.

Hey, friend, you got a cigarette?
I do not promise that this film is sure to please everyone. Someone it may seem protracted and even boring, devoid of the usual drive. And the main thing-the constant chatter of the main characters on the case and without. But one thing is for sure-this is not an ordinary movie event, but rather an extraordinary spectacle, and, as I think, it is definitely worth spending time on it.