The ghoulish seven: top scariest movies of the 2000s (part 1) 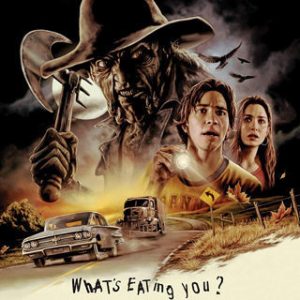 Have you ever wondered about the reason for such a wide popularity of the horror genre? Is it normal to watch people suffer on the screen? Well, it depends what we take for the norm. Analyzing the popularity of films with a rating of 16, and even 18+, with an abundance of blood, dismemberment and multiple scenes of violence, scientists have come to the conclusion that in this way people — mainly male audience — realize the behavior peculiar to the ancients, or rather — the assessment of danger. The choice to watch horror movies in the viewer is quite conscious: in this case, the desire to get a dose of adrenaline, thrills, which many so lacking in real life. A kind of roller coaster for the lazy. On the occasion of the recent Halloween, we remembered the best, in our opinion, cinematic horrors of the 2000s.

1. “Jeepers creepers” (Jeepers Creepers, 2001)American Director Victor Salva was fascinated by the horror genre while still a schoolboy: his first creations were shown to classmates in the dining room of the school.
Entering the time of maturity, in 1986, Salva shoots “Something in the Basement”, which attracts the attention of Coppola himself, who financed his next project. However, the real success came to Victor after the release in 2001 of the film about the monster-eater of people.
The film begins, like most road thrillers, with a car dissecting the expanses of a deserted highway. On the way to vacation to mom Darry (Justin long) and trish (Gina Phillips) will meet with a rusty van and its driver… Well, the viewer will soon find out who, in fact, Jeepers creepers and what he does on Earth every 23rd spring.

Combining malooriginalnyy the plot road-horror and image monster unknown origin (with familiarity the viewer with Dzhipersom is happening gradually: first in field of view — only his van, then silhouette from afar, then closer… and only in late we see “face hero”), Silva has created something incredibly macabre. The film keeps in suspense from and to, and for the ending-a separate fat plus: this scene will not let you sleep for a long time, and the music will play in your head again and again. By the way, Clive Barker himself (“Hellraiser”) said about” Creepers “the following:” This is the worst horror film of the last decade.”
Interesting facts: 1. Resource “BBC Movies” gave the film four stars out of five, calling it “an Incongruous and creepy, clever horror film. Such a film makes you hold your breath”; 2. The name of the picture gave the first words of the chorus of a popular song 30 years “Jeepers Creepers»;
3. The filming of the film “House of Clowns” turned into a loud sex scandal for Silva (the Director was accused of seducing a minor actor). The image of the monster in “Jeepers creepers” turned out to be very homosexual: just look how he sniffs young people!2. Call (The Ring, 2002)” the Ring ” — the film Gore Verbinski — remake of the eponymous Japanese horror film 1998. It is worth noting, the remake is very successful. To the most strengths work in primarily belong casting actors and visual a series of: surprising clarity pictures of the as would brings the viewer — Turing and now looks very modern-to around the underway on the screen (you remember, whatever faded were paint Japanese movie?), well, for Naomi watts, the role of Rachel Keller became a happy ticket to Hollywood.
In General, the film is incredibly solid, artistic and really scary. Just imagine: a strange cassette gets into your hands, you understand that you should not watch it, but for some reason you watch it. Then the bell rings, and the voice on the other end tells you that you have only a week to live…
Verbinski’s “call” is one of those noble horrors that frighten without straightforward violence. This is a much more finely organized fear of irreversibility: when the blood runs cold from images with symbols. By the way, very beautiful, and sometimes-aesthetically perfect.Interesting facts: 1. “The call” became a hit at the box office, grossing approximately 130 million in the United States and 120 in the world. In the first day of its release on video in stores sold out two million DVD-copies!2. When actress Davey chase (Samara) watched “the call” in a movie theater, she had to close her eyes in fear at the sight of herself… Some viewers, coming out of the cinema, saw her and also were horrified.

3. “Descent” (the Descent, 2005)Perhaps one of the best films in this collection — the British tape of Neill Marshall, “thundered” in 2002, the team action film “Dogs warriors”.”Descent” – the story of six friends who decided to explore one of the caves of North America. By the way, the beginning of the film is so dramatic that it seems much more. But no: here the worst, of course, lies ahead.
“Descent” is rightfully worthy of a separate place in any collection of the horror genre, despite the fact that it does not occupy a single star of a truly world-class. Marshall masterfully created an atmosphere: if you are claustrophobic, you will podumaet after half an hour of viewing. The uneasy feeling will be compounded when it becomes clear that the rockfall and the next “no way out” is not the biggest problem. And, as it turns out, there is on Earth (or rather, in its depths) something worse than betrayal and even the loss of family.The film won the Saturn award in the category “Best horror film”. And he is, believe me, really damn good!

Interesting fact:
1. The film had its London premiere in 2005. The same week in the city explosions thundered, which negatively affected the box office of the picture. Nevertheless, Marshall’s film, with a budget of 3.5 million pounds, grossed 57 million worldwide; 2. The appearance of monsters was kept secret from the Actresses. So when it came to filming, the girls got scared and ran away from the set to the entire crew for laughs;3. With the exception of the actor who played the role of Sarah’s husband (who died in the fourth minute of the film), and a couple of extras in the hospital, there is not a single male character in the film.
4. “House of Wax” (House of Wax, 2005)Picture directed by Jaume Collet-Serra-remake of the same film in 1933. The plot is easier than a turnip: six friends go to a football match and quite predictably turn the wrong way.And yet “house of wax” is different from all these ” twists and turns of Hollywood.” Combining the popular among filmmakers theme of dolls/puppets with slasher, Serra gave let not a masterpiece, but quite a unit with well-twisted nuts. The cannon fodder here is cute and also for every taste — a thin blonde, a determined brown-haired woman, an African, a guy with a steel press, Dodik-maniacs “stink” like pieces of shit, and their creations are generally beyond good and evil. Undoubtedly, the nerves will tickle. And Yes, I kept wondering: guys, where did they get so much wax?!The film won the 2005 youth Choice award for best Thriller. Perhaps it is, and it is one of the most striking representatives in its genre.

Paris Hilton in a rather unexpected role…
Interesting facts: 1. During the filming of the final scene, actress Elisha Cuthbert got stuck in a melting wax bed many times: in fact, peanut butter was used as wax.2. The main villain in the story is named Vincent — in honor of actor Vincent price, who played the main role in the original 1953 film.
3. Paris Hilton did not audition, as she was the Director’s only choice for the role of Paige, eventually winning the nomination… “The best scream scene.”