“Spider-man: away from home”: what do I want to be when I grow up? 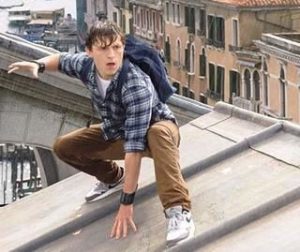 Another marvel movie comic, spider-Man: far From Home, had to perform several tasks. He should somehow smooth out the effect of the “Finale”, effectively launch a new phase in the history of this film universe and become no worse than the previous spider-man film, “Homecoming” (about how to become better “Through the universes”, there is no question).

“Away from home” comes out in the midst of high school graduates applying to universities, and the film’s main storyline intersects with this event a little. Peter Parker, a sixteen-year-old who has all thoughts only about a classmate, will have to choose how to live on-to remain a friendly neighbor spider-Man, who has time to study and friends, or take responsibility and become a full-fledged hero, on whose actions the fate of not the district, but the whole world depends.That is, he, like today’s applicants, need to understand who he wants to be, at an age when the psyche is absolutely not prepared for this and life experience for making such important decisions simply does not exist. And on him, as and on yesterday’s schoolchildren, press their expectations adults. Peter may really want to hang out on the web only between the skyscrapers of new York, eat ice cream with MJ and awkwardly kissing in the corridors of school, and here he is forced to save the world. And it’s an honorable mission, of course, thank you for your trust, Mr. fury, but Peter, in the first place, is not sure that he is suitable for this role, and in the second place, even in his heart, it seems, is far from it.I love when characters in movies are shown doubting. Peter has the real impostor syndrome. “I not hero — – thinks he, – I not “the Avenger”, I so, simply the kid-spider, help in measure forces, but something serious leave, please, adults.” There are no adults.Some of them are dead after the events of the “Final”, some are just outside the access zone and go about their business, showing no desire to fight for anything. All hope — on nimble spider, whose shoulders are not ready to withstand the burden of such responsibility.The world is trying to gradually recover from the events of the “Final”, life slowly accelerates, new enemies appear. And, fortunately, along with the enemies there is the same responsible adult, which can be with a clear soul to lay down all the powers to protect the world from some global threats and go about their business. The role of the new father figure was taken by Mysterio, played by Jake Gyllenhaal. He sees Peter as good-natured, selfless, willing to do anything to achieve his goal, understanding what is at stake. And he has stubble — not like Mr. stark’s, but still. And glasses with large lenses suit him. How could he not be trusted?Theme search themselves, his place in this world, the need conform to whose something expectations — perhaps, precisely this part of Aoyama makes the film maximally close for modern youth audience, which learns listen to its heart of, not chorus willing only for good absolutely leftist people. Although filled with awkwardness and clumsiness, the romantic line also contributes a little to this.

The facade for such a deep enough (by the standards of entertainment cinema) philosophy is filled with comic moments of the plot with a high-tech “votetopovorotom” in the middle of the story. Heroes travel on bright, multi-colored Europe, change locations without any logic, as in “John Wick”, and against this multi-color the second not less important theme begins to unfold.
In this age of false news, Deepfake algorithms, and others capable of generating fake texts, videos, and images that are virtually indistinguishable from the real thing, the question of what is true and what is not is becoming increasingly urgent. What and who can be trusted? Nobody knows. And this theme famously twists the plot in the second part of the film, adding to the previously comic and generally insipid narrative of psychedelic action, psychologism and even light horror elements.The usual, through the secondary beginning of the film as if lulls the vigilance of the viewer, and therefore, in contrast, the next hour of the story seems at times livelier, juicier and more relevant. What are the problems of teenagers, what are you talking about? There’s stuff going on that! Large-scale, big, important!

But in this large-scale-big-important just perfectly interweaves Peter Parker with jumping on a sinusoid self-esteem, even not trying to get rid of the mental attitude “what will people say”. At such a moment, Peter, completely lost himself, needs someone who will give a goal, tell where to go and what to do. And, fortunately, such a person is. They become happy Hogan, the faithful head of security Stark Industries and a friend of Tony stark, who knows him like a flake. It is happy who pushes Peter to choose. Dirty pushes, of course, to the point of rudeness teardrop. From the series ” We bought an apartment near MSU for a reason, son, dad worked very hard for this, he believes in you.” Ah, modicum AC/DC have included.In terms of action, the next series of the comic does not pass-the villains are large-scale, special effects are bright, the destruction of the tour beauty is graphic, unknown devices are pleasantly technological and glow blue. Integration with the modern reality of the film is excellent-teenagers make crooked presentations, constantly conduct live broadcasts, documenting their every move, quickly create idols and heroes, are afraid, nervous.The authors of the film play on a powerful fan nostalgia. The narrative because of the constant transitions between locations seems torn and crumpled, and the writers and editors admitted that the finale after watching the “Finale” they had to adjust in order to disperse the emotional swing as much as possible. I think those who are” Final ” imbued, appreciated the changes.

Has “Away from home” fulfilled its objectives? Yes and no. For habitual already makhachem in this history lurks indeed the actual subtext, and for this movie is worth put handful of pros — because in superheroike such meets rarely. This relative layering is what makes it better than ” Homecoming.” And the world after the events of the “Final” continues to live — and the plot is excellent, very realistic shows.
Perhaps Marvel this time turned out to be a superhero film with the most useful morality: do not believe everything that happens around you, but believe in yourself, your strength, and trust your chuyka. Still, it is better to go in the engineering profession.