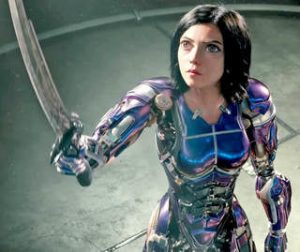 Cyberpunk, like, by definition, can not be cute: the world in which high tech is combined with low life, most often shown in the dark and damp, highlighting objects with flashes of neon with chopped shadows. “Alita” (Alita: Battle Angel) in reading Hollywood absolutely not such a. She is bright, bright and simply charming.

Simple plot: a girl with amnesia wants to find her past. Complication: the girl is actually a cyborg. A more serious complication: the girl is about three hundred years old and it is collected on the currently unavailable technologies lost after the great War. Simple plot: a girl finding herself, simultaneously acquires friends and enemies, lose a little and those and others, set himself a specific goal and goes to her with the tenacity of an armored train.What is the purpose of film adaptations? Well, it is clear that in the first place the creators of the adaptation want to cut down the dough, of course. But. It should be understood that the film adaptation is an interpretation of the original. This is the original source, passed through someone’s head (and sometimes even more than one), someone has already processed and issued to the audience. The basis of the film was launched in the early nineties manga “Gunnm”, on the basis of which there was a pair of OVA-series of anime trying to collect disparate, broken down by chapters of the manga into a single work.But such paintings have two types — those who are familiar with the original, and those who were led to a beautiful picture. In the case of “Alita” I belong to the second camp. The picture is really good: in the first half of the film, most of the events take place during the day, and in the light of the yellow sun, the gnawed cyberpunk world looks more like a modern teenage vision of a post-apocalyptic dystopia. The second half of the film is a little harsher, but still does not roll into the typical technological Noir.Even the classic cyberpunk of sinawava there are only a couple of invisible tracks somewhere in the middle. Bright scenery, a girl with huge eyes, who explores the world with an innocent but tireless curiosity — in General, visually the beginning of “Alita” from any “Rapunzel” is not much different. Performed by Robert Rodriguez and James Cameron, the film is primarily a tale of growing up, of accepting oneself and finding one’s place in life. Only in the role of the Princess here is a three-hundred-year-old cyborg created to kill, but this is a formality.

It’s the cutest cyberpunk movie I’ve ever seen. And he is cute not only because of the light picture, but also because of the shifted accents. Most of the time we are shown how good Dr. IDO, played by Christoph Waltz, like a techno-Aibolit, mends neighbors, taking payment in oranges, as children frolic in the streets, roller-skating at breakneck speed, as a street musician plays a two-fingered guitar in three cybernetic hands. Fountains are noisy, dogs running around, merchants were talking… Quiet, smooth, grace-the viewer is not immediately dipped in dystopian severity, class and despondency.
And, to be honest, the sadness in the film bring only classic romantic moments, without which this kind of picture has nowhere to go. But the situation is saved by another type of activity — juicy robertclemens. Cyborgs in the film in addition to Alita a lot, but it is, of course, the most beautiful, and therefore regularly crumbles enemies without any problems. Most of the cyborgs resemble Garbage at one stage of the build from the clip “The World Is Not Enough” — a human face glued to a jumble of mechanisms and dubious combinations of machinery that sometimes even differ from the format of classic humanoids. Looks a little weird, but okay — not everyone can be Alitame.

And these mechanisms fly to pieces relish, sometimes, it seems to me, going beyond the children’s rating PG-13. Oops, Ah need to same, someone ripped out from torso head with spine, but spine something metal, not bone, and krovischa blue, not red, means, until “Saws” on cruelty not hold out. Oh, just think, someone cut off the face, it’s polymer, not leather, the right word.
There’s robertclemens in the movie give a lot, and Alita happy to it starts. Even more joyous than exploring the world, because she believes that the battles will awaken memories in her and help her understand how to live something further. And, to be honest, a simple viewer in my face is happy about it-the fights are put well, CG is used to the fullest and as creative as possible, and the action came out bright. Slowmo, of course, sometimes infuriates, as it should be slowmo, but still adds entertainment.Hollywood “Alita” on the promise, on the subject, on the mood, on the history can even be compared with “the First player to prepare” and “Valerian”. These are technological fairy tales-dreams, toothless, despite all cruelty shown in them, kind in the basis, simple as valenok. First of all, these films are a visual feast for those who love high-tech soap, and for those who like to examine the footage under a magnifying glass, looking for Easter eggs and references. Flirt with the audience begin with the very first frames, replacing the logo of the screensaver 21st Century Fox on the 26th Century Fox-it is in the 26th century and the events of the film.”Alita”, like these pictures, is naive, than reminds a film fantasy of the end of the last century. And so watch it easily and simply, as in childhood. The departure from the classic canons of cyberpunk in the film adaptation of the classics of cyberpunk expanded the audience of the film — in the cinema will sit and 13-year-old girls who were led to the big round eyes of the heroine, and after the session, perhaps, will go to sign up for MMA: Alita brings down enemies very gracefully.James Cameron waited for the film adaptation of “Alita” 20 years – at first the technology was insufficient, and now he is busy with the next “Avatars” and in the Director’s chair let Robert Rodriguez, giving him the script and taking the role of producer. Therefore, the film is acutely felt the spirit of the old school action and epic.

“Alita” can be said to be completely secondary. The plot is predictable, the characters are banal, the villains are simple, the dynamics are unhurried. The film will not help the viewer to learn something new, to leave the cinema with crazy eyes and think-think-think at night about the imperfection of the world. All that is shown in “Alita”, we have already seen somewhere. Just Cameron and Rodriguez put all these familiar pieces together, seasoned with their signature styles and sent to the screens.
It’s a simple movie. Through and through. And it entertains first of all not the audience, but its creators. When you start the film adaptation, you need to be able to keep the balance: to make the film fascinating for those who are not familiar with the original source, and not to anger those who have lost the original to holes. That simple shirnarmassam “Alita” will taste, I have little doubt – it’s a simple Hollywood gum, received a Japanese twist. And in the performance of “Alita”, this highlight is inscribed in the implementation much less clumsily than in the same “Ghost in armor”, though still in a distorted form. “Alita” looks quite good as an independent movie, and understatement in certain moments is a typical case for modern scenarios.
“Alita”, however, unlike independent films has an advantage: if there is something missing in the film — you can always join the original. And here is question: enough whether good “Alita” for moreover, to engage the viewer, encourage his to familiarize themselves with primary source, deeper to study history girls-cyborg, and then, if all develops aptly, go on sequel?