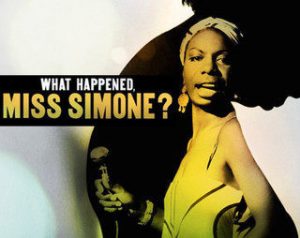 If you want to really feel the life of your favorite artist or band, you should pay attention to the genre of documentary films about music. Agree, nothing captures as the opportunity to find yourself “in the shoes” of a favorite artist.

To date, there are many good films in the documentary genre, and Directors continue to delight us with annual premieres. Over the past decade, there have been at least a few first-class thematic films, well, below is a selection of our favorites.

“What’s the matter, miss Simon?”(What Happened, Miss Simone, 2015)Many documentaries about music are not easy to find after they have been removed from the box office or after being broadcast on TV. Fortunately, with the advent of the Netflix service, something has changed, and now we can enjoy a film about Nina Simone.
The film directed by Liz Garbus is episodes from the singer’s home archive, footage from her life, unreleased songs. “What Happened, Miss Simone” has been presented at several prestigious festivals and nominated for an Academy award as “Best documentary of the year”.The story of this woman is amazing. In addition, here we see a fairly objective look at one of the most striking figures in the world of music, so this picture is definitely worthy of your attention.

“Oasis: Supersonic” (Oasis: Supersonic, 2016) As you know, in the UK 90’s for the title of leader of BritPop fought two bands-Oasis and Blur. The film “Supersonic” tells the story of Oasis from the formation of the group to the sensational concert in Knebworth in 1996. You’ll hear an abundance of rock ‘ n ‘ roll, narration from the lips of the Gallagher brothers themselves with rare footage, speculation and, of course, rocking tracks.Matt Whitecross’s film reveals not only the difficult moments in the relationship between the brothers with each other and their father: you will also learn where in Noel’s head ideas for songs were born, and why the now defunct band is still alive in the hearts of their fans. In General, this is a unique nostalgic journey, reminding all of us that such bands, alas, are no longer created.”Amy” (Amy, 2015)the Tragic death of Amy Winehouse in 2011 shocked the public. Four years later, the light saw the tape “Amy” Asif Kapadia. It premiered at the Sundance film festival in 2015. the Film, awarded numerous awards, including the Academy award, focuses the viewer’s attention on Amy’s first steps in the musical world. And this is not a story about how to earn the love of millions, but the story of an ordinary girl who wrote poetry, sang and struggled with drug addiction at the same time with the rise to fame.This film, which touches on many intimate moments of Winehouse’s life and is subject to harsh criticism from her family, is definitely worth watching.”Fleetwood Mac: Don’t Stop” (2009)the Film, filmed by the BBC, tells perhaps the most difficult story of an influential British-American rock band. Focusing on the album “Rumours”, “Fleetwood Mac: Don’t stop” reveals the many difficulties of the life of the band-intrigue, squabbles, in a word, everything that was behind the creation of the greatest album in history. Since then, the musicians have calmed down, allowing them to make sensational shows in recent years, although recent disagreements have killed any hope of a future tour.It’s not easy to find this movie on the Internet, but it’s worth seeing, especially for Fleetwood Mac fans.”Bob Marley” (Marley, 2012) Only a few names sound as authoritative as the name of Bob Marley. He has an influence similar to the Beatles, if not greater. In the 2012 film, the creators combined fragments of exclusive interviews, as well as memories of different people about the king of reggae.Cool, funny, incredibly touching film is perhaps one of the best in its genre, and you do not have to be a fan of the creativity of the Jamaican legend to enjoy watching. This picture, affecting all spheres of the artist’s life (from music to social activities, family, faith and death), will make you feel his story.Bob Marley literally turned our world around, brought a new culture into it, and not only musical. His fans idolized him-probably each of them wanted the beloved musician to live forever. Unfortunately, Marley left too soon, but like all significant personalities he remained in the hearts of millions of people and in the film Kevin MacDonald.