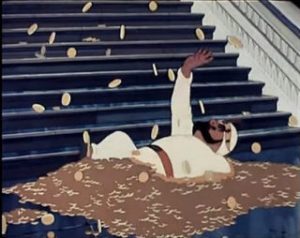 Mastering of the duplicated phonograms when change volume of channels, something dozapisyvayut and once again all Repack in lossy-formats Dolby and DTS-a subject of separate and sad conversation. About adventures of sound at localization of foreign cinema it is possible to compose legends, operas, and for the most part tragic. But it happens, by the way, that trepanation are subjected to their own films.Cartoons — the most defenseless in General, the soundtracks of Stalin’s cartoons were periodically replaced even when the USSR was alive — “Scarlet flower”, “snow Queen” , etc. Some multi-part tapes like “Mowgli” were cut for remounting in full meter, to the displeasure of the creators. In the 90s, the video market received many copies of cartoons with obvious color distortions, made either by unusable kontratipam, or simply not by technology.But the most terrible abuse of all the memory remained cartoons of the USSR marked “restoration”, surfaced in 2001. “Golden antelope”, “mashenkin concert”, “Geese-swans” and other classics. Instead of the familiar voices and orchestral music from childhood, the audience found some hack with cheap MIDI-trills. All this good is not just sold in retail outlets, but also heavily rotated on a variety of TV channels.The people raged in the forums, of course, the most intelligent talked about a crusade against our civilization. During long-standing interview the Director of “Soyuzmultfilm” on a request to name guilty only threw up hands and complained of abstract poor people. What really happened to the Soviet legacy of cartoons? And it turned out to be like that joke about winning a million. In General, and came in the other direction, and the campaign was not a crusade, and in a circle with a rake.The one hell of a voice

The restored image with the original sound
Who had stood up — and he preavviso so, what about preserving the original content was lost to follow-up. According to the documents, the same “Golden antelope” was re-voiced by the forces of the companies “Studio as” and LLC “Children’s session 1”. They also performed a very rough restoration of the image, the difference can be seen even in these two YouTube videos. For what? To replace the original titles and thus register new rights to the content, which were then transferred to the subsidiary of “Children’s session” – LLC “Kinoseans”. In addition to “Antelope”, a similar fate befell many other cartoons 40-50-ies.In the future, a little less barbaric, but still quite unceremoniously treated Soviet cartoons Studio “Close-up”. To MIDI symphonies, fortunately, is not reached, but on the soundtrack are imposed all sorts of new sounds, not provided by the script. Restorers shamelessly bullied brightness and contrast to the poisonous colors; to consult the original sketches in the Museum of cinema, no one comes to mind. What preceded this situation?In 1992, the refugee actor Oleg Vidov bought the rights to more than a thousand cartoons from 1936 to 1989 from Soyuzmultfilm for $ 500,000, which by that time had become known as “rent” from the state enterprise. To explain what this office was like in 1992, I think, is not difficult. “Soyuzmultfilm” left 90% of the staff.In the Wake of perestroika and Western interest in the heritage of the USSR, He and his American wife planned to engage in a cultural challenge. Actually, in the contract it was not about the full redemption of rights. Films by Jove took control of rentals outside the former Soviet Union for 30 years.

In order to promote Soviet cartoons on the international market, the Vida-Borsten spouses attracted Mikhail Baryshnikov and other celebrities, restored the image. Of course, for a new audience was re-made film track in English, which marked many Hollywood stars: Jessica lang, bill Murray, Kathleen Turner, Timothy Dalton, etc. in the future, the cartoons were translated into other languages.The English-language release of the Snow Queen, released in 1999 by Films by Jove on DVD. Gerda was voiced by Kirsten dunst, and the Snow Queen on the French track was voiced by Catherine Deneuve. The original soundtrack appeared only on the reissue of 2006 yearat the case when the Soviet cartoon quietly pirated in the United States. In this 1993 VHS release of the Snow Queen, a certain Cascadia company threw out all mention of the original creators and made Kai and Gerda John and Yvette

In 1999 “Soyuzmultifilm” again became the state enterprise, i.e. FSUE according to documents. With the drawing of new cartoons things went sparsely, but the management began to dispute the missed opportunities. Under the 1992 agreement, Soyuzmultfilm participated in 37% of the profits from foreign rentals, but Films by Jove was in no hurry to announce the profit, claiming that it was eaten by the costs of restoration and marketing-only about $ 4 million.Then “Soyuzmultfilm” said that in 1992 it was not the “Soyuzmultfilm”, not such a real FSUE, as it is now, and therefore the contract of those years should be declared legally void. Litigation ended with a deal between Alisher Usmanov and Films by Jove in 2007, which resulted in the rights to the cartoons were transferred to the children’s channel “Bibigon”. But be that as it may, the chances of buying an official copy of the Soviet cartoon with the original author’s picture and sound today tend to zero.The remastered version of “Close-up” (2004) looks the clearest, but the color balance is shifted so that the snow Queen sits among the green ice, voice-overs and doverieleninskoe statement about the movie was prophetic. The authorities could not spoil ordinary citizens, but still paid special attention to art as a showcase of the state. It is thanks to this policy that we have the very gold Fund of “Soyuzmultfilm”, which is now shared by the hapless heirs.So, despite the bureaucracy and dogmatics of the party, the dubbing genre in the USSR was a very sound and high-quality product. Erotica and ideologically uncomfortable passages from the originals were cut out, but to the actual voice acting anyhow who was not allowed. It was a responsible job for the most talented artists with theatrical experience.
Please note that the film of 1976 made a modern color correction, but high-quality Soviet dubbing left on mestea now sense to sigh for the warm intonations of professionals of the USSR? The Soviet system of production and quality control of dubbing simply would not have mastered the huge mass of foreign cinema that today comes to re-sound. Then it was piece work. Even animals in cartoons 40-50-ies spoke in the old Moscow way (“Not Boyce”). So it was accepted in the Maly theater and the Moscow art Theater. And now as they say on TV? Young presenters, shaking their heads, with pressure something chatter on the move, imitating the stamps of Leonid Parfenov. In General, the speech format of the media is a hash of the jokes of the Bukin family and the “New Armenians”, what are the claims? But it is still curious to study the drift of audience demand for the concept of foreign film translations.Let’s start with the fact that there is a purely generational imbalance of expectations. For Millennials do not mean anything sentimental to the “votes” of the video. The most scrupulous connoisseurs of English will also point to very free interpretations of those cooperative times. Although in modern translations there are enough lapses, including quite malicious mischief.After the Soviet full dubbing, for a long time the neutral voice of the translator, superimposed by voysover on the original track, was considered the most preferable. But this is not enough for the young viewer, he still wants intonation. From my own experience, I can confirm loyalty to the new model dubbing, but at the same time I have not developed the habit of global standards in the production of film courses of the former USSR.A dull sound, dark corridors with brown scales.; the sample of “domestic cinema” I have tightly stitched tape until the 2000s, as the most relevant to the surrounding landscape. Why so? Yes, go to visit or look out the window!Domestic melodrama 1999: the last days of warm tube cinema
Whatever visual quirks in foreign films would not be in Vogue, still this context is perceived by and large abstract. When local start issuing the bourgeois post-production — hmm… The picture simply “you do not believe” – though fair teal&orange though discolored under Nordic thrillers.Not everywhere glossy superrealist. Soulful sfumato is better suited to our films, as I see it. The feeling of ersatz will aggravate the aggressive soundtrack with fast and furious on sharp sounds. It all deadens the sense of ownership to the heroes. It doesn’t ring like that!
Director Sarik Andreasyan wants more hell!Better consider the creative side of the functionality of the rental industry. Everyone knows that the voice of a certain actor is assigned to the movie stars on the voice acting, as before, for example, Karachentsov for Belmondo. Duplication can be full or VoiceOver. Under full marks adaptation scenario text (camping on E. and jokes with sayings, too,!) plus synchronization with actors ‘ facial expressions. A colossal amount of work! And how many have heard about “Gur-Gur”?