“Ralph vs. the Internet”: deep thoughts in a child’s wrapper 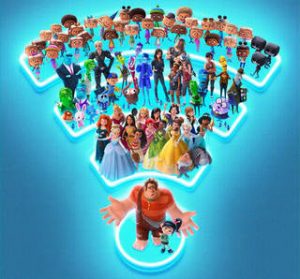 Animation has long ceased to be a genre for children. Hundreds of threads on forums are devoted to search of various Easter eggs and references to the real world and serious topics in animation, and in discussions about a plot in the style of “what the author really wanted to say” the strongest minds of mankind fight. And to combine a bright, cartoon design with something close to an adult, you really need to be able to. Fortunately, the creators of the cartoon “Ralph against the Internet” (Raplh Breaks the Internet) it turned out.

Recently, cartoon franchises have been growing with their viewers. On the sequel to finding Nemo-finding Dory – most of the movie room was occupied by teenagers and students, not children, and they were happy to return to the characters of childhood. It is impossible not to remember “toy Story”, which followed Andy to College, and “monster Corporation”, which transferred the main characters to the University at the exact moment when fans of Sally and Mike had to be nervous about their own entrance exams.With “Ralph” the story is similar — the sequel came out six years after the first film. During this time, for example, I managed to get a degree in physics and start working as a journalist, and someone graduated from school and faced a difficult choice of future life. And the creators of the second part of “Ralph” decided to help undecided teenagers find answers to questions.If the first cartoon simply showed that even negative characters can be kind with a certain motivation and support, the second touches on more realistic problems-the problems of finding yourself and your place in the world. And he does it right — with jokes wrapped in familiar images from the media environment, a bright picture, the necessary share of epicness and a huge pinch of morality.

There is a clear gradation of what and for whom created in the new “Ralph”. Bright, juicy, fascinating picture is provided for children. But the plot is focused primarily on teenagers and adults, and it is he who is served through the prism of modern interaction with the Network. On adults, remembering by name disney princesses and other artifacts of the last century, most of the jokes are directed.
At the center of the story, of course, are the adventures of Ralph and Vanilope, two best friends from slot machines who suddenly got to the Internet. Of course, at first the breadth of the world wide Web discourages, because of what the characters get into trouble, but along the way they find new friends, try to deal with the existing problems, with themselves and with their relationships, and then, as it should be in a disney cartoon, after an epic final battle come to a consensus.

Topics that rise in the plot of “Ralph”, very young children are unlikely to be understood. The creators consider the issues of loneliness, betrayal, routine and the search for the very thing that will make the eyes burn and the heart-tremble. This will be especially interesting for teenagers who find themselves after graduation and adults killed by the daily repetition of the same scenario. It is teenagers and adults who will laugh at how Disney makes fun of the images of princesses imprisoned in uncomfortable dresses, computer illiteracy, over the General visualization of the Internet, over the educational program for the correct upbringing of children.
But if, for example, in “the First player to prepare” Spielberg Easter eggs and references were served either carefully or for the development of the plot, then here Disney simply shoves everything that he has a license, right in the face of the viewer. Cameo lot, but the meaning of them a little. Even Stan Lee had a place.

Minor characters succeeded. In addition to Ralph and Vanillope appeared free as the wind, rebel racer Shank, the head of the local version of YouTube Class, following the trends, Spamly, personifying advertising banners with all sorts of nonsense, and Mr. all-Know, voiced in our version by Anatoly Wasserman. They are bright, clear, with their own values and ways to achieve their goals, with their own morality. Here, however, I want to kick the localizers for the fact that the translation focused on the social network “Classmates”, which the main audience of” Ralph”, I think, in principle, is not familiar.If the first half of the cartoon is interesting to follow how the characters are trying to get out of the problems they created and understand themselves, then closer to the final “Ralph” begins to drown in moralizing. These moments, of course, try to smooth jokes and ridiculing stamps (Vanillope, for example, like any disney Princess, forced to sing, and even explain how to do it), but the promises of “envy and jealousy-bad, we must give other people to build their lives and not consider them their property” and “living people are more valuable than likes” are served very On the other hand, in a cartoon with a rating of 6+, no matter how adult he tried to be, still have to talk about the truisms — from this stamp will not run away.

And in the end, the cartoon turned out colorful, fun, filled, though not very gracefully, various references, but with a protracted second half. At the same time, “Ralph against the Internet” looks easy, causes a smile and generally leaves a pleasant aftertaste. Pleasant and a little sad. Because life can suddenly change at any moment, and so that it will not depend on you. The child does not realize this message, but the adult, unfortunately, is too familiar with the great power of random and its consequences.