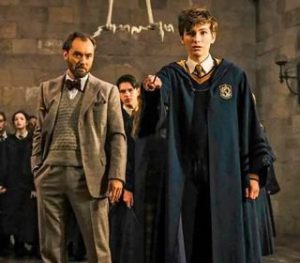 It should be noted that the franchise “Harry Potter” has had a huge impact on mass culture. Perhaps, on popularity from book series and their adaptations its surpasses, wasn that, “the Lord of the rings” – but books Professor and there are longer, and, say honestly, have more fertile the ground for multi-year discussions.But the success of “Harry Potter” is not a secret, and it is logical that such a cash cow should not be missed. In the first “Fantastic beasts”, events which occur about a century before all the pandemonium with the boy with the scar, the viewer is enticed by the atmosphere and mantle: follow the adventures of a shy magical zoologist and animals in the distant, incomprehensible and harsh to America was very exciting and damn magical. In the first “Creatures” was the spirit of magic, the spirit of adventurism and crazy, the spirit of interesting, though simple, but exciting stories.

In second “Creatures” this there is no. The creators of the film, apparently, understood, that syuzhetno particularly not pull, and tried to play on nostalgia, vpihnuv epic species Hogwarts, melodies from soundtrack films “Harry Potter” and characters made there same, double, incidentally, breaking built Rowling in books chronology. That actually, actually odd, because the script was written by Rowling herself.But such nostalgia looks like a dirty attempt to attract hardcore fans. Because the second “Creature” is not a fairy tale. It’s a bloody drama with five fucking love lines, rudely cut by an evil editor into absolutely indistinct pieces, flavored with the stupidest dialogue, which does not save even the charming antics of Eddie Redmayne and the burning gaze of Zoe Kravitz, and completely spoiled characters of the characters.

Who did we see among the protagonists in the first part, besides the shy zoologist? A progressive sorceress, her sweet, but able to stand up for herself sister, a charming Muggle Baker and a handful of a variety of magical animals. In this part, all but the little animals seem to have turned into sexually anxious teenagers (adjusted for the 1920s-then did not talk about sex, but covered themselves with marriage). The salvation of the world? Oops, Yes, know, somewhere on backdrop of all our personal suffering magical version of Hitler (this itself Rowling so told, if that) tries to find allies and to seize the world. He can wait, I’m with a man it is necessary to understand. Or not. Who will understand me.

I won’t forgive the writers for what they did to all the female characters. And old, and new have left the only gyrus “relations” and cut off all the rest. Flatly. With most of the men did almost the same, unfortunately.

The first “Creatures” were a whole, independent work. The latter seem to be an out-of-context piece with no end, no beginning, no middle — just a hastily cobbled-together mishmash of episodes of heartache. The line of Ezra Miller’s hero raises a lot of questions-it comes out of nowhere, leads to nowhere, ends strangely. His if would have left only because, that he very grassroots people (so not first time make — for the same reason, for example, have resurrected hedgehog shadow in series of games “Sonic the Hedgehog”), and defying all decided drown in liters senseless and ruthless drama. If something bad can happen to Cridens-be prepared, it will happen.

Johnny Depp’s character-Gellert green-de-Wald-is supposed to be a wonderful, persuasive speaker, charismatic and powerful magician. In fact, you can see the old uncle under three layers of plaster, struggling not to slide in the intonation of Captain Jack Sparrow, but does not have a gram of such a character’s fascinating energy, encouraging him to listen and believe him. Young Dumbledore in the performance of Jude law is beautiful and charming, but, again, incomprehensible and prescribed too superficially.The film is dark. At first I thought that I was unlucky with the hall, but, apparently, not only me — that the colors are too dull and dark, and other spectators mention. This effect looked good in the last two parts of “Harry Potter”, where we were preparing for an epic battle — but they were preceded by six bright, juicy, filled with a riot of magical colors pictures.Sequels are good. Sequels on books-too: it is worth remembering “the Lord of the rings: Two towers”, which you can easily see two or three years after the “Brotherhood of the ring”, understand everything, do not miss anything and do not bite your nails in anticipation of the “Return of the king”. In the case of the second “Creatures” everything is worse. At first I want to compare them with the second “Pirates of the Caribbean”, which gave a clear hint of the continuation and the third part. But “Pirates” thus had a logical tie, exactly, accurately moved on a plot, ended with rather interesting turn after which really it would be desirable to wait for continuation and to understand that will happen to crew of the Black Pearl.It is said that the film was a victim of the modern love of cutting scenes and the subsequent release of Director’s versions. David Yates, dear, please do not work with those editors who so mocked the “Creatures”. By God, even Jason from Friday the 13th cuts more neatly. The film was a blur, a twisted medley of unrelated scenes. And even nostalgic views of Hogwarts, jumping out at the viewer, like the devil out of a snuffbox, do not save the situation.The only joy is the fantastic creatures themselves. But their was so little, that even sense to mention their in the title there is no. The best thing about the movie was the Chinese demon cat… And we, meanwhile, are waiting for all three films in this series.