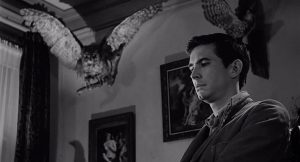 7. Maniac (Bloody harvest/FR. Haute tension, France, 2003) French Thriller directed by Alexander Azhe (“Mirrors”, “the hills have eyes”) in our collection — a kind of delicacy before dessert… This film is certainly not as popular as the above pictures, but is familiar to fans of the genre. With a fairly simple plot, initially resembling ordinary slasher, “Bloody harvest” has an original approach and a completely unexpected denouement.The maniac performed by F. Naon is too out of the list with his unpresentable appearance. As something are accustomed we, viewers, if not to frankly attractive psychopaths, like Bates and Bateman, then as least – to neat and well educated, as Dr. Lecturer:) Here same nor faces, pardon, nor skin: monster on rusty truck, obese, in smeared with blood overalls, with the face of, similar on bloated a potato, with lumps dirt under fingernails.Its atrocities are “drawn” too naturalistically, motives are unclear — at some point you catch yourself on feeling of deep disgust to everything happening on the screen. END_OF_DOCUMENT_TOKEN_TO_BE_REPLACED