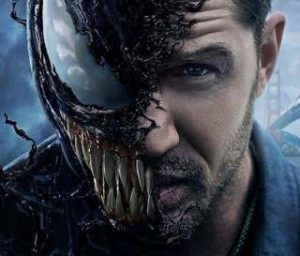 A long time ago, Sony bought Marvel rights to everything related to “spider-Man” as a character, including the villains who got in his way. One of these villains (although it is more correct to call him an antihero) was venom-symbiote, which even lit up in the last “spider-Man” from Sam Raimi.Bearing in mind, apparently, the success of the brutal Fox releases – “Deadpool” and ” Logan — – Sony decided to bet on blood. However, still inscribed it in the framework of the rating PG-13, so as not to lose a profitable audience in the form of teenagers.The story, in fact, is simple, and you can fit it in two words: random partners. This plot is found in the cinema for many decades and was especially popular in action films of the end of the last century. There most often partners were either criminals, or, on the contrary, police officers, learned to get along with each other and to do the General good business.This is the whole essence of “venom” – a story about two random partners, that’s just they do not just save the world together, but also live in the same body. Successful reporter Eddie Brock, known for his profound and controversial investigative journalist, reluctantly interviews obsessed by the idea of improving the quality of life of the scientist and philanthropist. In interviews, he asks awkward questions and then loses his job, house, fiancee and even her cat, remaining on the sidelines of life.

However in end it turns out, that awkward questions he asked not for good reason and philanthropist indeed hypnotizes not the most ethical things — podsazhivaet, for example, alien organisms in human bodies, hoping achieve adequate symbiosis and coexistence (because and calls such organisms symbiotes). And in the end, Eddie, who decided to fight for the right cause, quite accidentally becomes a body in which one of the symbiotes is prescribed-venom.
The most (or even the only) beautiful thing about this film is Tom hardy playing a character quite unusual for himself: cowardly, unlucky, doubting. Many are used to this Tom hardy, who breaks the backs of every Batman and shoots in the kneecaps of British hard workers, and here we have a rotten journalist, independently broke his life and vegetating at the bottom. This looks unusual for the hardy hero is pretty funny and, I thought, now. Moments” disease ” hardy plays at all remarkable, scene in restaurant — one of the most survivors and beautiful. His reaction to the appearance in his life (and in his body) alien black BLOB in General is very real: first to be frightened, then to get used to, then to get rid of, then to reconcile with the inevitable, and all — to mutual pleasure.

In addition to Eddie Brock, the symbiote venom that possessed him and the main villain-philanthropist Carlton Drake, there are several other characters in the film, whose existence you forget immediately after leaving the cinema, because the interaction with them is very conditional. Michelle Williams plays the former fiancee of Eddie Brock, whom he spoiled his career, but the emotions in the communication of the characters are not felt at all, although her character is perhaps the most adult and adequate. There’s her new fiance, there’s a girl scientist who’s got a bad conscience, and a couple of completely third-rate cartons.

The only relationship that is somehow spelled out is Brock and venom’s partnership. The way they learn to coexist, how they come to a common goal, how they try to realize this goal — it’s funny to watch these skirmishes. Hardy independently voiced venom, playing with filters in Garage Band, and the voice acting feels that the character came out though cliched, but alive, snide, arrogant and cheerful. Venom’s motivation, of course, is controversial, but there is some logic in it.
One day I will stop going to movies in which reviews will have to use the word “cliche”, but, apparently, still not soon. “Venom” consists of cliches almost 146%, and these cliches are taken from different genres-from fighters, horror films, film comics, classical Comedy plots about cops-partners. This is a huge prefabricated hodgepodge, a wild mixture of everything we have already seen, and mixed not very uniformly.

Action boring. Jokes are funny only in the version without translation and then on the wave of nostalgia for the nineties. The romantic line seems sewn somewhere on the side by the third leg. The drama and suffering of the sinking Eddie Brock is hard to believe. The villain is not just formulaic — he is no, and the final battle is so simple, mediocre and stupid that you do not want to remember it. By God, even the justice League was a little more fervent in that regard.
With all this, I do not regret that I went to “venoma”, and even on a rare session with subtitles. I spent most of the movie breaking it down, remembering the moments I’d seen in Men in black, Rush Hour, shows like Almost human. Some part of the session I spent, covering his face with his hand, because to look at what was happening on the screen was simply a shame: so everything was banal and bad (first of all, I’m talking about the scene of the final battle and, in principle, all the moments with the so-called villain). She chuckled at the jokes, most of which came from Eddie and venom’s banter.

The result was a very strange mixture: the film seems to have had a good chance to become a sturdy boevichkom from Marvel, but fell ill with typical errors DC. It has a nice heart lover of comics Easter eggs, it is fun and even the long-awaited anti-hero, it is, most importantly, Tom hardy, who admirably and with wagering Brock, and voice acting venom. In it there is no, however, integrity, there is no completion, there is no bright action, there is no drama and feelings, but there is a dark picture. The perfect word to describe “venoma” is bland. Desaturated even. And Tom hardy wasn’t enough to breathe color, life, and emotion into him.

On the other hand, the film evokes a keen sense of nostalgia for American action movies of the nineties. Here’s just a small problem: it’s 2018. But the militants of the nineties now you can easily revise at least for streaming, though illegal. So why, in this case, need “venom”?
P.S.: I Remembered the second plus, in addition to Tom hardy, – Eminem and Run the Jewels play in the credits. And the second scene after the credits inspires hope that Sony will still be able to do something good with “spider-Man”.